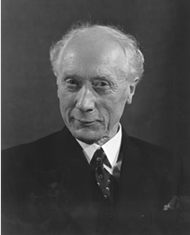 Frederick Mathias Alexander (1869-1955) was an Australian actor who began to experience chronic laryngitis whenever he performed. When his doctors could not help him, Alexander discovered a solution on his own: He had not been aware that excess tension in his neck and body were causing his problems, and began to find new ways to speak and move with greater ease.
His health improved to such an extent that his friends and several of the doctors he had consulted earlier persuaded him to teach others what he had learned. Over a career span of more than fifty years, he refined his method of instruction.
After teaching for over 35 years, he began to train teachers of what has now become known as the Alexander Technique.